Marie Labrecque was born on August 31, 1920 in Lambton. She is the daughter of Félix Labrecque and Nellie Morin. She is the youngest of a family of 12 children.

She attended secondary school at the convent of Sainte-Rosalie, near Saint-Hyacinthe. Next, she started as a teacher at $25 per year. Like Émilie Bordeleau in « Les filles de Caleb » by Arlette Cousture, she had to walk through snow in the winter and start a fire in the woodstove before the students arrived.

In 1941, at the age of 21, she joined the Sisters of Misericorde. She would remain there for 34 years (1941-1975), taking the name of Sister Sainte-Mechtilde. She announced this to her parents in a goodbye letter. She would see her family again and her parents were happy.

In 1943, after a two year novitiate, she studied at the HEC business school, on Saint-Hubert Street, which was the location of the first school of social work in Quebec.

In 1945, she obtained a graduate degree in social work.

In 1951-1952, she graduated in literary studies from the Université de Montréal.

In 1953-54, she went to study at Fordham University in New York and completed her training with visits to charitable institutions in the United States. She obtained a master's degree in psychiatric social work.

Returning to Montreal, she worked at the aid office for pregnant girls who came to stay at the Sisters of Misericordia on Dorchester Street with Sister Saint-Jean-Vianney (Thérèse Bernadette Gingras), founder of the Center. This is the beginning of the Centre Rosalie-Jetté, in 1955.

To raise money, she organizes concerts, including one with Jacques Labrecque (Quebec singer, folklorist, producer and publisher). Other types of fundraisers, like fashion shows, take place at the Ritz Carlton Hotel.

For 10 years, Sister Mecthilde will go everywhere to give lectures on the situation for single mothers: Schools, parent associations, firefighter stations, women's associations (Daughters of Isabella, Cercles des fermières (women's group), female business leaders). Note that it is thanks to her that we owe the change of terminology from ‘unwed-mother’ to ‘single mother.’ She also participated in many interviews for the press, on radio and television with various hosts, including among others, Judith Jasmin, Michèle Tisseyre, Pierre Nadeau, Wilfrid Lemoyne and Jacques Languirand.

As well, she held meetings with the Montreal Catholic School Commission to enable young, pregnant teenagers to continue their studies. As a result, academic courses, a business course, home economics and ceramics classes were to be offered to attendees.

The Centre Rosalie-Jetté welcomed 300 young girls annually. Most of them gave up the care of their child, putting it up for adoption or to be raised by their parents. In 1957, another house called La Villa Saint-Michel opened its doors, followed in 1959 by the Manoir Sainte-Dorothée in Laval for pregnant women from a privileged background. Previously, to avoid bringing dishonor to their parents, they were exiled to New York, Mexico or Europe for the duration of their pregnancy. The opening of the Pension Giroux (note: Pension means ‘boarding’) would allow approximately 10 girls to continue their school year at the Center and receive services that would contribute to their social rehabilitation.

In 1965, at the request of Cardinal Léger, she accepted the role of Assistant Director at the Office des Oeuvres. Among the problems that attract his attention, there is that of illiteracy. In 1968, the organization of the Comité d'éducation de base pour les adultes de Montréal (a committee for basic adult education in Montreal) was created, thanks to the charity work volunteered by diocesan organizations and religious communities. In 1972, the center was absorbed by the Montreal Catholic School Commission (now the Commission scolaire de Montréal) and became SEBAM (Service d'éducation de base aux adultes de Montréal (basic education service for adults in Montreal). It would close its doors in 1982 and its activities would be transferred to the Commission’s schools.

In 1969, Monsignor Grégoire gave Marie permission to go to Fribourg, in Switzerland, for a project to found a school of faith (École de la Foi) where courses in scripture, theology and philosophy were taught.

Sister Mechtilde, Marie, wants to understand poverty: As a result, she lives the experience of rummaging through what she can find along the streets and in front of hotels. Like many of the single mothers she has met who, to survive, become domestic workers, she is hired as a housekeeper by the wife of a Swiss government leader. She understands that the feeling of ‘being someone’ can easily be taken away.

In the summer of 1970 she went to Clichy, in the suburbs of Paris, to do an internship at Le Nid, an international organization that helps prostitutes. There, she undertakes the difficult task of learning about street work and sidewalk encounters, especially in Pigalle. She then goes to Trosly-Breuil, France - specifically to L'Arche, a small village where mentally handicapped people live together. They live in small houses, learn trades and are assisted by volunteers from around the world. This organization was founded in 1965 by Jean Vanier, son of Montrealer Georges Vanier who was a diplomat and Governor General of Canada from 1959 to 1967. Jean Vanier died on May 7, 2019 at the age of 90. He was made a Companion of the Order of Canada in 1989, received the designation ‘grand officier’ (a Grand Officer) of the Ordre national du Québec in 1992, and became a Chevalier de la Légion d'honneur (Knight of the Legion of Honour), in France, in 1994.

After her two-year cycle at the École de la Foi, Marie went to the Montreux Hospital for ear surgery. Unfortunately, the surgeon could not do anything. It was a despairing situation. Without resources, she knocked on the door of an unspecified religious community. The group welcomed her and decided to send her to the mountains to allow her to regain physical and mental health. After writing to the Sisters of Misericordia, she received the necessary money for her return to Quebec.

Armed with her experience at Le Nid, she takes part in a new project that involves reaching out to prostitutes, to offer them a welcoming presence. ‘Quebec society, in the early 1970s, does not seem so different from today. Women who engage in prostitution are stigmatized, excluded, rejected, and even despised’.(2)

"Chez Marie," on Saint-Denis Street, thus became a special, welcoming place to meet. Marie also visited clubs, the streets, prisons and courthouses to meet these women. She even wanted to live for six months with the inmates, a request which was denied by the Ministry of Justice. To support expenses, she decided to work part time. She finds a job as a saleswoman in a ready-to-wear store in Plaza Saint-Hubert to get to know people. She next worked at the CLSC in Hochelaga-Maisonneuve as a social worker with disadvantaged families and in 1975 at the Laval Center of the Sisters of Misericordia, a home for single mothers.

In 1975 Marie Labrecque left religious life to marry a young lay theologian who was completing his master's degree at the Université de Montréal. She was 55 years old and he was 23. The marriage lasted 12 years. They left for Toronto because Marc decided to become a chiropractor. She began teaching at Gabrielle-Roy School and then at John Fisher. In 1983, they opened a clinic in Lambton, Quebec, and later another in Longueuil. Around 1988, they separated and divorced.

Marie was now living in Longueuil, where she found a job as a receptionist at the Louise-Lambert-Lagacé Nutrition Clinic. She would go on to stay for four years.

In 1990, when she was 70 years old, she had a serious car accident on the Eastern Townships autoroute. She was in a coma at St. Vincent de Paul Hospital in Sherbrooke. Twenty-four hours later, she woke up; she had no broken bones 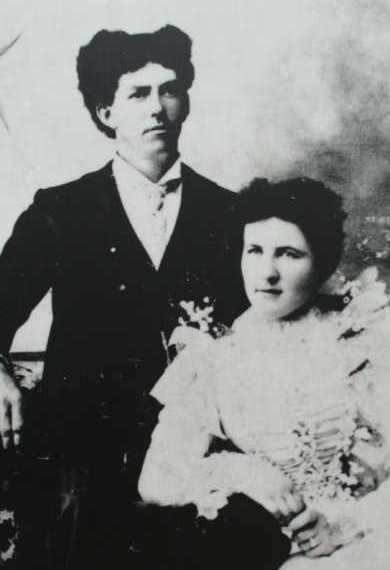 The parents of Marie Labrecque.

Tombstone of Felix Labrecque, Nelly Morin and other family members